Coma Roulette - Theme From "The Forest At Night"
Cuscutta - Rented Room
OF WOLVES - Mens Rea (Izaguf)
Unnatural Ways - Trying To Pass
Wretched Empires - Shadows
Wishfield - Nothing
Nico Tracy - A Deep And Empty Grave
Val Dorr - t k hh
The Sun Came Up Upon The Left - Forever Sleep
Fataliste - Rabid Wolf
Castle Ov Yester - ...I Loved You Within And Without -O Lord, I L-Loved You
Karnstein - Lycanthrope
Fogweaver - Beyond The Wall
Evergreen Refuge - Even Nowhere Is Somewhere
Order Of The Wolf - This Is Not A Brave New World
Vi Res - Pulse
The Sun Came Up Upon The Left - Turn Away The Spoken Word
The Doom That Came To New York - Beneath The Walls Of Non-Euclidean Geometry
on April 28, 2020 No comments: 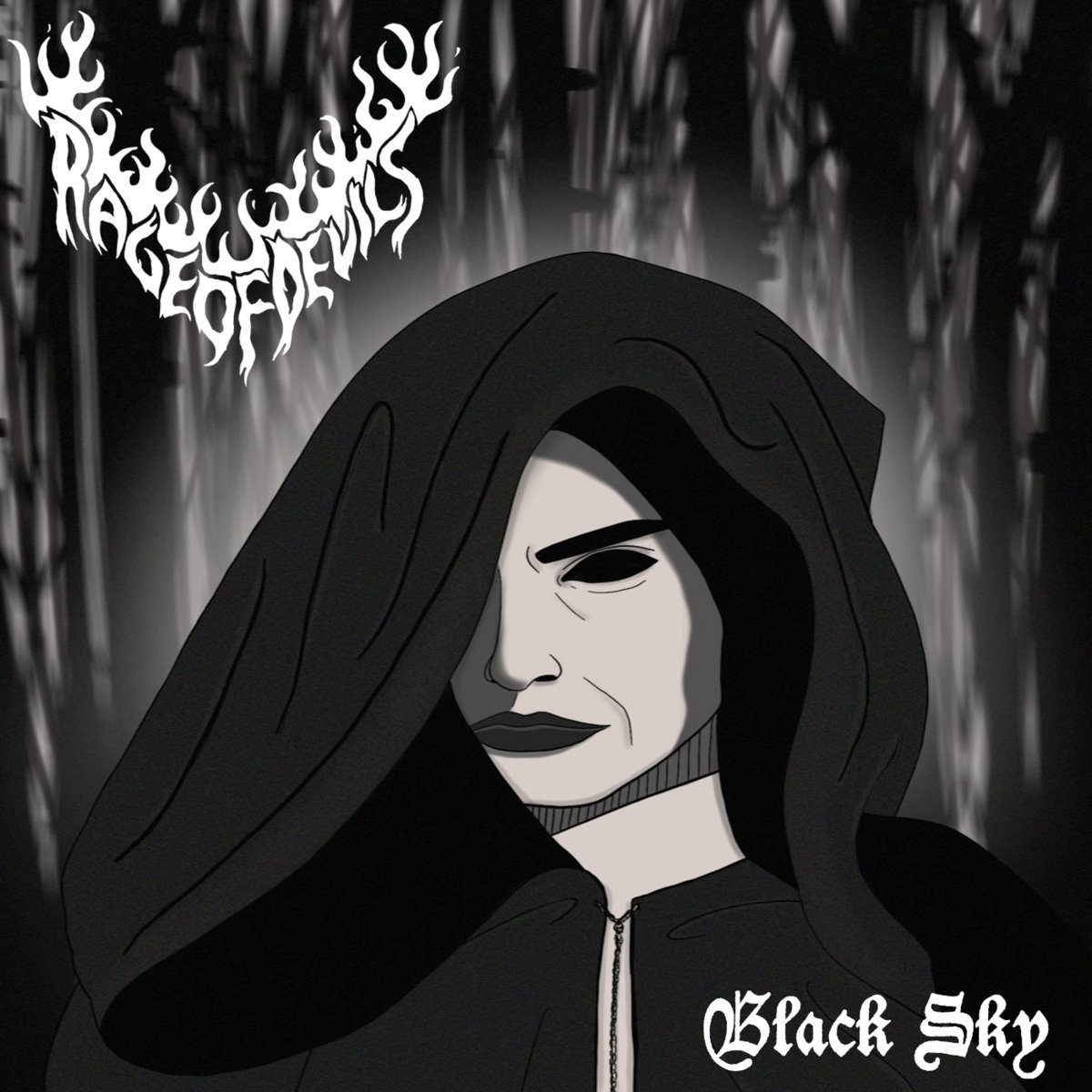 There's a sentiment that one-man raw black metal is supposed to be excruciating--a genre of solitude, hatred, anger, and above all, pain. Rage Of Devils delivers on that sentiment.

This five-track debut EP follows the playbook perfectly-- harsh, unyielding production, guitars so harshly crunching that they're damn near chainsaws, raw, compressed drum lines that pound and crack like an artillery barrage. You Belong In Filth, the main single, damn near explodes with this destructive energy, with the strained, throat-squeezing vocals barely keeping up with the instruments at times, as though project mastermind Aaron Palmer is being physically tortured as he attempts to whelp out the threats he aims directly at those who would dare hurt those who risk their lives to cross the border.

I'm not going to lie here; I normally can't stand straight genre exercises. Straightforward grind bores me, black metal tends to cause my eyes to glaze over, and don't even get me started on by-the-books djent or post-metal. Aaron's latest is a rare exception, delivering by-the-books raw black with the force of a sledge to the skull and with a healthy amount of praxis and leftist politics.

Check out the track debut of the lead single on Episode VI, and if you enjoy it and want more, you can find the release--currently available via the name-your-price option--here.

Coma Roulette - Theme From "The Forest At Night"
Wintarslaf feat. MISANDR - Can We Get This Right? (WA1897.14 Mix)
Crown Of Asteria - Summer
Hallucinogenic Bulb - Restoration Experiment 02
Unnatural Ways - Draw That Line
Non Serviam - Ramasse (album version)
Everson Poe - The Beast (Track Premiere-review here)
Youko Heidy & L'eclipse Nue - No Moonlight To Guide Us
Poppet - At The Maw Of N Kai
Byzanthian Neckbeard - Extinction
S H R I E K I N G - Emperor Of Nothing
Fogweaver - And The Sound Of The Breaking Sea
Mesa - Watcher Of The Forest
Epimetrius - He Was In A Great Dark Corridor
Putrescine - Inhuman
Bitter Lake ft. Ivan Belcic - New Branches On Old Trees
Everson Poe - ii. weatherer : a. wintersleep b. the anvil c. red fog
Wishfield - Nothing
The Guelph Basin - When They Found The Bottom They Just Kept Digging
on April 20, 2020 No comments:

COMPILATION REVIEW AND TRACK PREMIERE: Hope Vs. Hate Records: Hope In the Face of Fear 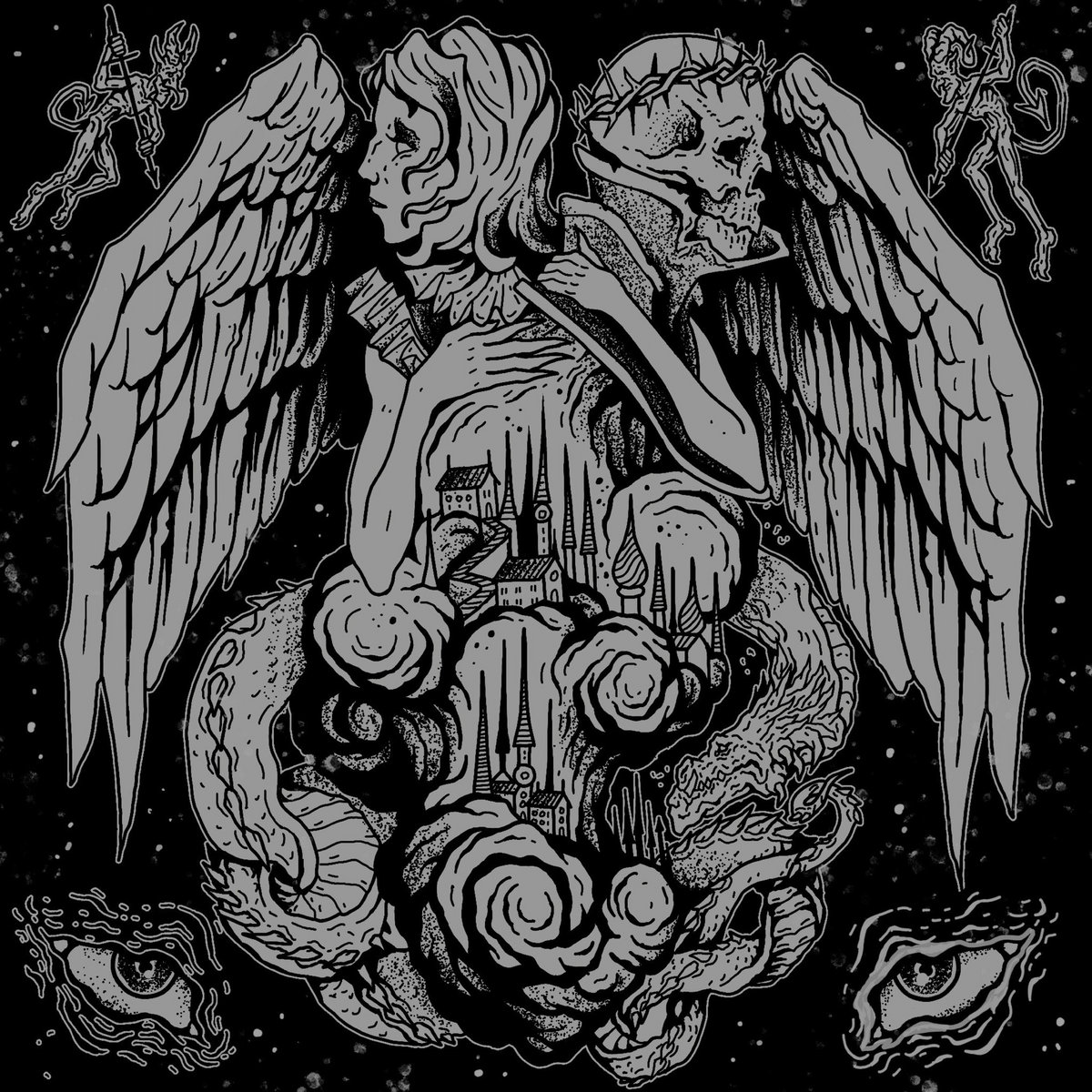 Featuring a stacked lineup (including yours truly as Ophelia Drowning), art by Jamie Christ, and nearly five and a half hours of music (yes, you read that correctly), Hope Vs. Hate does not disappoint on their first charity-raising compilation. Is it worth your money? Yes. I don't know why you need to ask that--even if it wasn't going to a damn good cause (which it absolutely is), you have new tracks from some of the brightest faces in leftist and anti-fascist extreme music, old favorites from the shining stars, and an entire shelf's worth of new records that you should be buying from the up-and-coming faces.

I received the press packet for this long before I received the album itself, and while I wanted to write something up to promote the project (which we did anyways, playing Everson Poe's track on last week's episode of The Forest At Night), I decided to wait until I had the project in my hands to write anything about it--and once it was, I popped it in. A few days later listening to this thing on repeat, and I'm back to tell you about it. While I could sit here and give you the gist of the project, I'd rather give you my highlights. So, here are my top 15 picks, in no particular order, from this monolithic juggernaut.

Combining my favorite aspects of the experimental acts that got me into metal in the first place--the opening section sounds borderline Arsonists Get All The Girls-inspired, and the chorus shouts and pulsing tom and snare beats slap you across the face with the unnervingly unevenness of early 2010s experimental--and the sure-footed smoothness that acts like Deafheaven and Ashbringer bring to the world of post-metal, M0L puts forth everything one could hope for in shoegazy, post-metally experimentation. FFO: Ashbringer, AGATG, Deafheaven

Do you like D-beat? Powerviolence? Metallic hardcore? No? Go home, sit in the corner, and think about what you've done. FFO: Converge, Norma Jean, kicking your ass clear up the curb

Nothing puts the listener on edge quite like a repeated, ominous, gentle riff with some good, old-fashioned chugs randomly thrown in, and the off-kilter time signatures don't hurt either. This piece just keeps building and building until the heart bursts open at around the two-minute mark, with a soaring requiem and a riff worthy of a bird taking flight. FFO: vvilderness, Harakiri For The Sky, Fallujah

Haunting sirens and fuzz-addled noise start this banger of an industrial powerhouse, and it doesn't let up from there--cymbals destroyed by distortion, a driving tom, and a violent explosion of what I can only describe as pure, unadulterated rage at the one-minute mark christens Mr. Jaime Christ as one of the reigning kings of industrial noise. This track will murder you. FFO: Altar Of Plagues, Author And Punisher, L'eclipse Nue

It's rare to hear drums applied with a level of precision that could be called loving, and it may be difficult to envision what that may sound like in an extreme music context, but as the words "raindrops fall/the blood in my veins/is filled with golden dust" and the smooth, passionate arpeggio of the nearly harp-like guitar plays against the pitter-patter of the double-kick, you'll understand exactly what I mean. FFO: Alcest, Crown Of Asteria, Wolves In The Throne Room

Flowing in and out of unique time signatures and in and out of keys and rhythms, Dreichmere crawls through musical marshes and ruins with a fluidity and grace that I haven't seen since early Mastodon. It's difficult to keep a riff this tight going for ten minutes, but by gods, these sludgy animals hold the line, and with such smoothness that had they not broken the piece up with some uneasy-listening clean guitars around the four minute mark I wouldn't be entirely sure they were playing more than one insane, complex riff. FFO: Mastodon, Baroness, Kylesa

There may be no love in your violence, but there is absolutely love in this reviewer's heart for this inane cavalcade of kitchen sinks being tossed at your skull with the rest of the kitchen busy trying to crowd-kill you. FFO: The Chariot, seeyouspacecowboy, Code Orange

This is the track we picked to play on the show, and for good reason--Everson Poe is quickly becoming one of my favorite voices in the world of emotive metal. Combining doomy, finality-laden riffage with a loving vocal lead, Everson pens themself a score for a dirge and an anthem to light a cigar and stare down the pouring rain to. FFO: A Dying Light, Swallow The Sun, Ahab

Shoegazy post-black at its finest and most precisely executed. The drums fade in from what seems like the other room, and the guitar playes through what sounds like a tiny speaker, evoking the feeling of being on the outside of a party you weren't invited to--until the riff sits in, the vocals careen off course, and the torrent of reverb-soaked dualing cleans and gutturals washes over you like a cathartic tidal wave. FFO: Old Grey, Oathbreaker, Cult Of Luna

Everything I love in avant-garde, in one philosophy- and praxis-heavy track. Filled with vocals that don't match worth a damn layered on top of each other, inordinately distorted garbled voices, and a high hat from what I can only assume is a Korg Volca Beats, among other, even more fun things. Do I know what I'm hearing? Absolutely not. Do I love it? You're goddamn right I do. FFO: Moody Black, Big Black, Marilyn Manson; preferably simultaneously, and in a blender.

Sweet christ, these vocals. Put your sanity in a plastic baggie from your local Kroger, hop onto a Harley with a 500CC engine strapped inside, and take that puppy for a spin, and you'll still have a tigher grip on your sanity than this vocalist cares to. Driving guitars and an even more driving beat makes for the kind of music to get into fistfights with at the local punk dive. FFO: The Melvins, KEN Mode, Jello Biafra


...And finally, I'm going to spare you all a "For Fans Of" list for the next three tracks, for one simple reason: the answer to "what is this similar to" is literally "my show". You like my show? Good. Give these three a listen.

It's new SHRIEKING. Y'all know I love SHRIEKING. Experimental slamming black metal filled with horror movie quotes, distorted noise, and enough viciousness to kill a walrus on meth. If you haven't bought everything they've ever made, I don't know what to tell you except to get on it.

It's Settle For Shadows. Read the first two sentences for my review for SHRIEKING and more or less copy it word for word. You listen to the show. You know GODDAMN well this is my jam. Wonky, glitched-out drums, synths that sound like buzzsaws, and a beat that Richard Cunningham would drool at the thought of setting to video.

An HNW intro laden with feedback, blast beats, gutturals, D-beat.....This is Sarah Bait. First time I've heard these fine folks, and I'm in love. I highly recommend you pick up these guys's first EP. Oh, and everything else they have out. Hell, I did.


You can pick up the comp here.